Focus on the Rue Daguerre 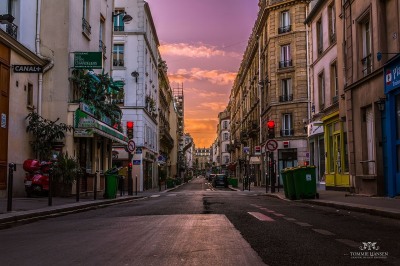 In a quarter with a village atmosphere, the Rue Daguerre has forged an identity of its own, being both a major shopping street and one of the capital’s artistic and historical centres. Plunge into the heart of this beautiful example of our city’s eclectic vibrancy close to the Hotel Sophie Germain!

An iconic street where life is good

Located within an area bounded by the Avenue du Maine and the Avenue du General Leclerc, the Rue Daguerre has maintained its traditional spirit and is home to many of the kind of small, local shops that once flourished everywhere. Florists, bakers, wine merchants, bookshops, cheese shops, cinemas, artists’ ateliers, restaurants and bistros coexist happily, creating a lively place where people are happy to chat!

This vibrant and characterful artery owes its name to Louis Daguerre, the inventor of the daguerreotype photography process. And let's not forget the street’s most charismatic former resident, the filmmaker Agnès Varda, who established her home, offices and artistic centre behind the lilac portal of number 86. The Rue Daguerre also boasts many artists' studios nestled in the Cité Artisanale at number 63, as well as one of the world’s finest comics shops.

A street for shoppers

Upon entering the Rue Daguerre, you will be unable to resist the siren song of shopping and the sheer pleasure of browsing the street’s diverse array of stores.

Pedestrianised from the Rue Boulard to the Avenue du General Leclerc, the street abounds in independent local tradespeople and also hosts a traditional market that will lead you by the nose with its aromas of raspberries, fresh fish and all kinds of cheeses. You will love the joyful ambiance punctuated by the cries of stallholders advertising their goods and, regularly in the late afternoon, the music of a violin player. Treat yourself to a shopping spree in designer boutiques, clothing outlets, colourful bookstores and appealingly decorated wine shops like the lemon-yellow Cave des Papilles, where you’ll benefit from the advice of a true natural wine enthusiast. You’re also sure to adore the pretty tableware shops and those such as Mes Indes Galantes or Nierika, which bring a touch of world culture to this part of the capital. Open to traffic, the western part of the street leading to the Avenue du Maine is more residential but also has its fair share of interesting shops. However, please note that the Rue Daguerre is closed to traffic every Sunday and during public holidays throughout the year from 10:00 to 18:00.

A choice of restaurants to satisfy your hunger

The chances are you’ll work up an appetite while browsing the Rue Daguerre, but there’s plenty of eating options. If you have a yearning for the flavours of North Africa, drop into La Baraka, a restaurant renowned for serving the best couscous in the capital. If you prefer Asian cuisine, head for Joy, an establishment well-known for its unforgettable pho. And that’s only scratching the surface of the gastronomic choice available on the Rue Daguerre!

Hotel Sophie Germain, a 3-star hotel in the heart of Paris 15th

The Hotel Sophie Germain is pleased to announce its reopening on August 31st 2020.