Posted on Thursday, 5 December 2019 in Exhibitions and Museums 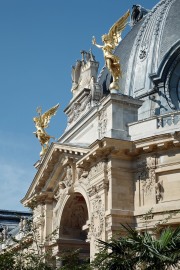 The Grand Palais, one of the most emblematic monuments of Paris, and the Petit Palais, another Beaux-Arts style architectural gem, were both built for the 1900 Paris Exposition, a hugely successful world’s fair. They both offer superb spaces for temporary exhibitions. In these exceptional settings, the works of the greatest artists reveal all the talent and vision of their creators. Read on for a short overview of the latest exhibitions at these venues.

Exhibitions at the Grand Palais

This exhibition, which runs until January 27th, 2020, redefines the image that we have of an artist most often associated with the culture of Montmartre and belle époque frivolousness. Nearly 225 works, including paintings, drawings, lithographs, illustrations and posters, represent the oeuvre of this aristocrat from Languedoc who interpreted late 19th century Paris with a perceptive, humorous and lucid eye.

Until February 10th, 2020, the El Greco exhibition examines the work of the last great master of the Renaissance, El Greco, the Greek painter who rose to prominence in Spain. This monographic retrospective exhibition demonstrates the electrifying talent and sensual, lively and emotionally profound visions of an artist who blended innovation and tradition in a humanist spirit. The multifaceted El Greco created audacious and spectacular compositions that you will have the pleasure of viewing in the prestigious setting of the Grand Palais.

Exhibitions at the Petit Palais

The Petit Palais, which boasts of the world’s largest collections of paintings by Gustave Courbet, presents a new comparison of the works of the French painter, sculptor and leader of the Realism movement, and those of the Chinese artist Yan Pei-Ming. Since 1980, Yan Pei-Ming has lived in France, where he is well-placed to indulge his fascination for the creator of The Origin of the World. To mark Courbet’s bicentennial, the Petit Palais presents until January 19th, 2020, the giant black and white paintings of Yan Pei-Ming and those of Courbet, which engage in a dialogue as intense as it is moving.

Neapolitan painting in the spotlight

Until January 26th, 2020, you can enjoy an exhibition dedicated to Vincenzo Gemito, the Sculptor of the Neapolitan Soul. Creator of a rich body of work that includes sculptures of celebrities as well as everyday Neapolitan people, Vincenzo Gemito demonstrated an inimitable style combining mastery and realism. The Petit Palais pays homage to the immense talent of the artist through this exhibition in collaboration with the Museo e Real Bosco di Capodimonte of Naples.

Until February 23rd you can also have the pleasure of admiring, for the first time in France, a retrospective dedicated to Luca Giordano, a Neapolitan painter considered among the most brilliant of the 17th century artists. Nearly 90 works reveal the exceptional virtuosity of this artist through his magnificent drawings and paintings. This exhibition, made possible thanks to a partnership with the Museo e Real Bosco di Capodimonte, completes the Petit Palais Naples season perfectly.